“We’re so caught up in our everyday lives that events of the past, like ancient stars that have burned out, are no longer in orbit around our minds. There are just too many things we have to think about every day, too many new things we have to learn.” — Haruki Murakami, Kafka on the Shore

The ‘danger’ of not journalling, I’ve learned, is that we tend to forget — both the good and the bad. Last year (2015) in February, I travelled south to Australasia for two weeks with my dear friend (and neighbour), Niki. Unfortunately, at that point in time, I hadn’t caught the ‘journalling bug’ yet and aside from the 2000 odd pictures I took during the course of the two weeks (apologies in advance, the photography wasn’t too great haha!) and the postcards I sent home, I don’t have anything else to aid my memory, but I shall try to revive and retain as much of the incredible memories that we made. Here goes nothing.

Our final destination was to be New Zealand, and the cheapest option to get there was a journey that included a 12-hour stopover in Brisbane. (Just 2 hours before our flight to Brisbane, we found out that if we were to want to exit the airport during a transit longer than 8 hours, we would need to get a transit visa!!! It was a mad rush to Plaza Singapura, but my Mum helped us settle things quickly with a travel agent there.)

Brisbane, the capital of Queensland in Australia, is sometimes called Bris Angeles, for the very reason that it used to be smaller but it grew and grew and swallowed the surrounding communities! (Definition of ‘Los Angelisation’: When a big city swallows other cities around it and the private automobile and its highways become the dominate citizens.) It stretches almost to the Sunshine Coast (Caloundra) in the North and the Gold Coast in the South.

Upon stepping outside of the airport, we were instantly warmed up by the abundance of sun rays throughout Brisbane. Fun fact: Brisbane has 283 days of sunshine a year. We took a train to the city centre and made our way to South Bank, which was absolutely stunning with The Wheel of Brisbane that overlooked the entire area and amazing views of the Brisbane River. We entered a part of South Bank with a chain of eateries offering affordable to-go meals — perfect, we were starving. Armed with wraps, smoothies and coconut water, we sat along the river bank and chuckled about a little boy refusing to follow his Dad. It was the perfect place to simply unwind. 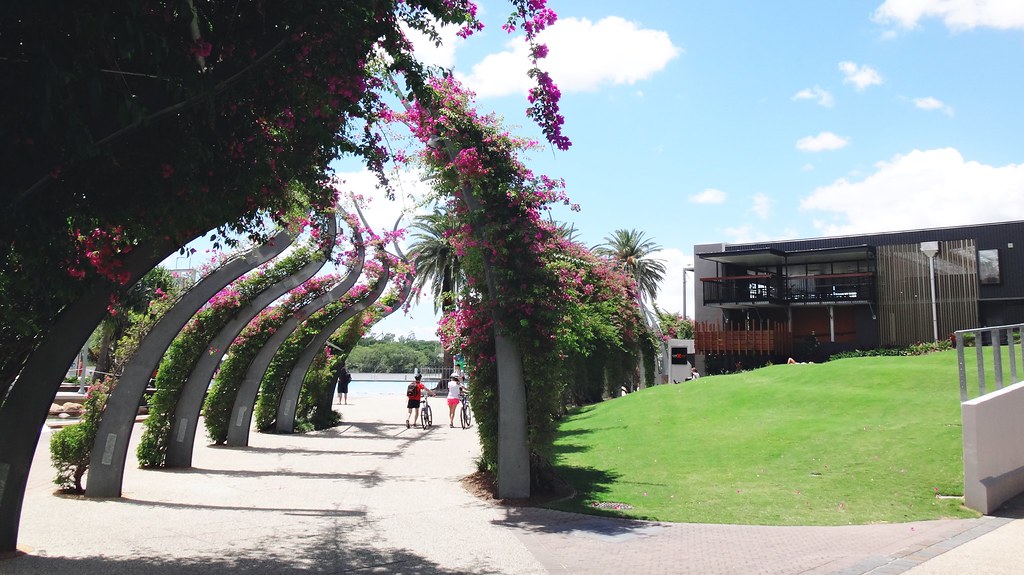 The Queensland Gallery of Modern Art (GOMA) (also located in the South Bank precinct), aka. the largest gallery of modern and contemporary art in Australia, was next. We were incredibly lucky to have been able to catch the exhibition, Future Beauty: 30 Years of Japanese Fashion, for it was scheduled to end on the 15th of February! Future Beauty is the first comprehensive survey of Japanese avant-garde fashion of the last 30 years, and it featured really quirky, really cool outfits, which were certainly a breath of fresh air. Have a look for Yourself. 🙂 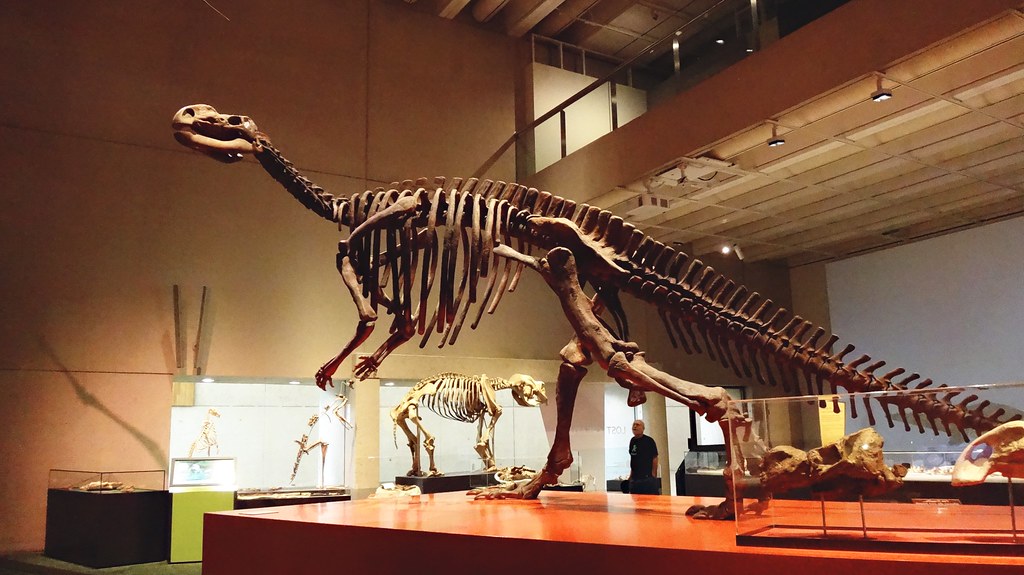 There was ‘Lost Creatures’, which was a dinosaur/ prehistoric exhibition that featured Muttaburrasaurus‘ skeleton (of course) among real and fake fossils, 3D digital models of dinosaurs and megafauna and… a flipbook station! We charged towards the flipbook station and, standing in front of a green screen, pretended to be running away from a dinosaur. It was the cutest thing! 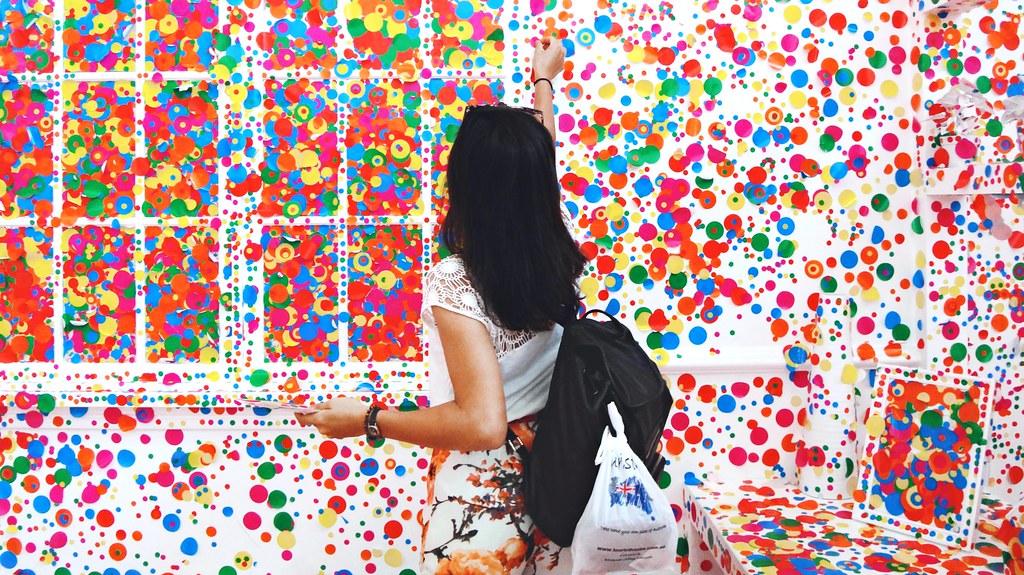 Then, we walked over to Yayoi Kusama’s The Obliteration Room. We learned that when the artist was a young girl, she started seeing the world through a screen of tiny dots. They covered everything she saw – the walls, ceilings, and even her own body. In her artwork, Kusama has used dots to cover many different surfaces and fill rooms. She calls this process ‘obliteration’, which means the complete destruction of every trace of something. ‘In this reworked and enlarged installation, an Australian domestic environment is recreated in the gallery space, complete with locally sourced furniture and ornamentation, all of which has been painted completely white. … it functions as a blank canvas to be invigorated — or, in Kusama’s vocabulary, ‘obliterated’ — through the application, to every available surface, of brightly coloured stickers in the shape of dots.’ We were given a sheet of colourful dot stickers and instructed to paste them wherever we wished — basically to ‘obliterate’ this large-scale interactive installation. It was like viewing life through childlike-tinted lenses — we were (almost) dashing across from one corner to the next and tippy toeing just to get to the spots on the room where we wanted to ‘obliterate’!

Brisbane City was an eclectic mix of historic and new buildings with lovely parks and lots of interesting sights to see. Fun fact: Brisbane was known to the early Aboriginal people as Mian-jin, which means “place shaped like a spike”. This was because of the skyscrapers! Another fun fact: In 2014, Brisbane was named Australia’s hippest city by Lonely Planet.

Jetlag was beginning to creep in as we snacked on sandwiches during our wait for our departure, but it definitely was a small price to pay for the blessing that is to travel.

Goodbye, Brisbane! Off to Auckland! 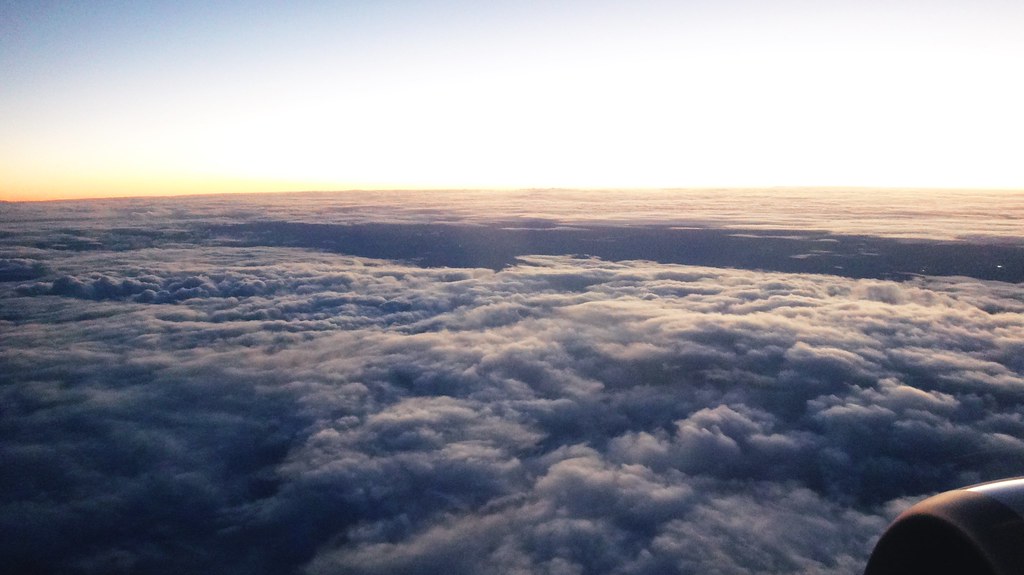